How to Identify Your Type of Hair Loss

HairOmega is formulated to support hair growth by addressing the leading of causes of hair loss. The most common cause of hair loss is having excess dihydrotestosterone, or DHT. When DHT levels get too high, hair loss can occur in men and women, leading to male and female pattern baldness.

Along with DHT, hair loss can be caused by numerous other factors, including poor nutrition. In addition to containing natural DHT blockers, HairOmega® DHT contains vitamins for hair growth such as A, C, E, B1, B2, B3 (niacin), B6, B7 (biotin), along with copper, selenium, zinc, and iodine.

You may not be getting enough of these essential nutrients from your daily diet. Adding natural DHT blocker supplements, like the ones found in HairOmega® DHT, can help to support hair growth, strengthen existing hair, and encourage the production of stronger, thicker hair.

Saw palmetto extract comes from the fruit of the Serenoa repens tree. It is one of the most popular ingredients used for blocking DHT and supporting hair growth. This comes from its potential to inhibit the enzyme known as 5-alpha reductase.

The main role of this enzyme is to convert testosterone into DHT, production of excess DHT results in shrinking hair follicles. Saw palmetto’s ability to block DHT naturally also makes it one of the most popular herbal remedies for blocking DHT.1

Evidence also suggests that beta-sitosterol is a DHT blocker17 and may support healthy DHT levels. Excess DHT causes hair loss and a study has demonstrated that taking a combination of beta-sitosterol and saw palmetto improved hair growth compared to placebo.14

Pygeum africanum extracts come from the bark of the African cherry tree. These extracts are known to contain the DHT blocker beta-sitosterol, ferulic acids, and other plant sterols. Extracts from Pygeum africanum may help to support hormonal balance via its ability to block DHT.3

Most prominently found in tomatoes, lycopene is an antioxidant and carotenoid, a natural pigment chemical that imbues certain fruits and vegetables with a red tinge. Found in apricots, guavas, grapefruit, and watermelons, lycopene most commonly comes from ketchup, tomato juice, tomato sauce, and other tomato products in the average North American diet.

Research shows that lycopene may help regulate cholesterol and blood pressure.4 As an antioxidant, lycopene can prevent damage caused by free radicals in the body.

Free radicals have an unpaired electron and can cause a chain reaction of cellular damage cells, DNA, and proteins. In the long term, free radical damage can accelerate the aging process.

Zinc is an essential mineral that plays a large role in your body’s health and survival. This mineral is most commonly found in eggs, legumes, oysters, seafood, and meats.

Zinc is used by enzymes involved in cellular replication and protein synthesis. These metabolic processes are utilized in the growth of hair.

Vitamin A refers to a group of compounds, including carotenoids, retinoids, and retinoic acid. While too much vitamin A may contribute to hair loss, studies suggest that retinol may significantly improve the condition of scalp skin and promote hair growth. In vitro studies combining minoxidil and retinol showed improved hair growth in hair follicle organ cultures.7

These fruits are a healthy source of antioxidants. Evidence shows that they may be beneficial in reducing diabetes-induced oxidative stress. In hair growth supplements, antioxidants can help to reduce and neutralize free radical damage, thereby supporting stronger hair follicles and a healthy immune system.

A compound known as raspberry ketone gives the fruit its distinct color, aroma, and flavor. A study involving the topical application of raspberry ketones in humans with alopecia found that it promoted hair growth in 50% of subjects.8

Pumpkin seeds contain several essential vitamins and minerals. They are a rich source of vitamin C, which may support collagen levels to improve skin elasticity and vitality. As an antioxidant, vitamin C may also combat common signs of aging, including fine lines, wrinkles, and skin discoloration. Pumpkin seeds are also high in other antioxidants that may protect against inflammation and free radical damage.10

Pumpkin seeds are a good source of phytosterols, which provide anti-inflammatory and natural DHT blocker properties to support hair growth and hormonal balance.10

Pumpkin seeds are also rich in zinc, which supports cellular growth and protein synthesis, strengthening hair and nails. They are also high in magnesium, a mineral that plays a role in supporting bone health and neural health.

Biotin is a type of B vitamin that plays a variety of roles in metabolism and cell signaling, and it may play a role in supporting healthy hair and nails. A prominent symptom of biotin deficiency is hair loss. In one study, 38 percent of women with hair loss were found to have a biotin deficiency.11

Green tea contains a variety of compounds that may support antioxidant activity and contribute to better health. Studies suggest that green tea may combat hair loss thanks to epigallocatechin-3-allate (EGCG). EGCG is a major constituent of polyphenols and may prevent androgenetic alopecia by inhibiting 5-alpha reductase to help regulate hormone levels.12

Selenium is a trace element that may present antioxidant properties. In rodent studies, rats with a selenium deficiency were found to have thin, sparse hair growth. Mice deficient in specific selenoproteins at birth showed progressive hair loss later in life.19

Had to try with people raving about it. Been on it for a couple weeks, and have seen my baby hair grow. Worth a try for anyone 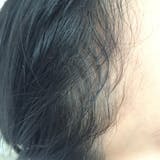 I've been talking hairomega dht for going on two years! It is an amazing product. Although, it has biotin, I still supplement with taking another 600 mcg biotin per day. 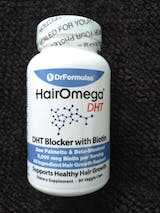 A
A.
Less fallout and growth

Been taking DHT Blocker for about 5 weeks now & I notice I’ve had less fallout in the shower & my baby hairs have been growing which has been my problem area for years, can’t wait to continue taking them to see even more growth 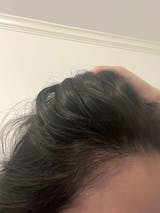 This has helped my hair grow so strong and healthy in a couple of weeks! I would always dye my hair so it’ll be hard to grow since the roots would be very ugly but with a fresh cut and this product it just does the trick every time for a healthy hair. These are 2-3 weeks apart. 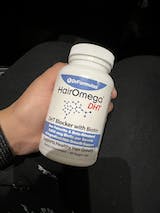 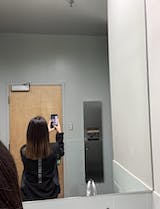 I've tried a few different hair pill supplements but I haven't found anything better than HairOmega DHT in this price range. I questioned if any of the other ones even worked or did anything, but this is the first one that I could definitely tell a difference with. I had healthier, stronger hair.....and much less hair falling out. I even noticed a difference after only a couple of weeks too. So this is worth a try and I would recommend it to people with thinning hair. 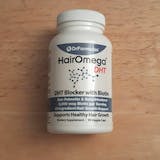